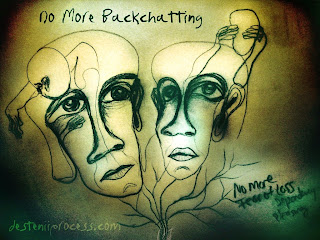 Looking at the next dimension of this 'talking things personal' personality and it is the Backchat dimensions, this within the previous post point of an event that opened up last week during work. I was confronted by a co worker about being late and thus making her late, and immediately I took it personally due to believing that I was being attacked, looking at it from within self interest rather then equality and oneness. Within taking this point personally, this is also indicating that I was in fear, which I previouslyspoke of, where I go into an attack mode, which I found it first starts in my thoughts. The back chat thoughts is the secret thoughts in the mind that come and are quite deceptive and nasty in nature usually being directed at another, and thus these thoughts are used to generate energy for the mind, which we eventually will act out in our worlds as abuse.

So within this initial point of being confronted about being late, my backchat was 'she is such a bitch, I am only a few minutes late, it's not my fault' and within this backchat, it is more a blame and self justification for my own self interest of not wanting to get yelled at by her and giving myself the most advantageous position as I will within these thoughts, will live out this blame and judgment of this lady through my physical behavior and actions eventually as being rude and unpleasant and thus not actually have to face myself and see that I am the one who is actually in the 'wrong'.

So it's for me to look at this point of accepting this backchat, which was based on my own self interest to make myself not have to face who I really am because I have this belief I am holding onto that 'I am better then others, thus I am right always'. These backchat thoughts were used by myself to generate the picture and energy to justify my position of self interest and make it 'seem' legitimate but in fact it was self dishonest. These thoughts being created to support my self interest and my dishonesty such as, 'she is not nice', 'she is so not easy going' 'she doesn't know how to tell time' 'it's her fault for not reading the clock right'. These being additional back chats that I continued to participate in while the initial backchat above was accepted within me and followed through my own participation. Allowing this continual thinking, it started to activate my emotional body which is how the mind was designed, and I started getting angry and thus I became the monster I had want to create as the other in my world, mirroring myself in the thoughts I am thinking about towards other, becoming unpleasant, very strict and stubburn in my thoughts of what was so, nasty in my assumptions, and mean in my physical behavior.

We really are what we think and so quickly we can become these demonic monsters by allowing these thoughts to accumulate by following them and then charging them up through becoming emotional about what we are thinking about and thus act this emotional state of illusion out in our environments Self honesty is key because this has become now, an automated systematic response produced by the mind through our participation as accepting, allowing, and continual participation in these back chat secret thoughts in our head. So here walking the disengagement of this systematic responses within and through my mind through self forgiveness, self investigation, self correction through and as my self honesty and thus stop all participation within each component of the mind, the thoughts, the reactions and the physical behaviors to really become equal as the physical and so be able to conduct always within the consideration of all that is here equal and one to myself.