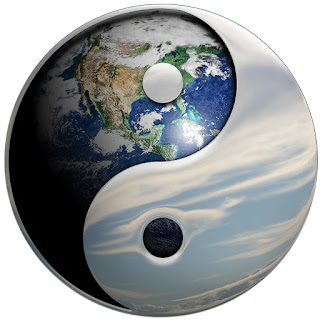 For me the expression of the yin and yang is the 'masculine' and 'feminine' expression of ourselves, this most would have a picture pop up of a male human being, maybe in a uniform or a business suit representing the 'masculine' word and for the 'feminine' word represented by a beautiful women in a sultry dress and ready for the town. And for me for many many years, this also was how I saw the words yin/yang, male/female, basic static pictures in my head.

Though once one start the process with self-forgiveness and living change that is best for all in self-honesty, which is the desten-i-process, one eventually will come to realize and see more within and as these natures, expressions, and living words of the masculine and feminine. So for me, I have realized these words are not just words but can be moved into expressions of oneself in a way of living in a new or refreshed way for instance. Like for me, I never much categorized myself as a feminine woman, yes I am a woman, but I did not see me as this picture in my mind of this beautiful, sultry woman and thus I believed then I am not a feminine woman. So it was an idea created in my mind of what I had to do to be a feminine women instead of understanding and realizing that it is not a picture i have to become to be feminine, but a way of existing, being that can incorporate the strengths and expression of the feminine design within this world and existence.

I found the masculine expression is similar to a blueprint or infrastructure, holding the placement for the feminine expression to merge and join in as the movement and flow of the creative expression that colors the blueprint infrastructure with creative ability. Through this with the support of each one holding the balance of who they are within and without, one get a balance of the expressions in a cohesive and ever-expanding way to give life and receive it equal and one.

I found within my own process, I as a female within my reality had to step up within myself in confidence, creative skill, stability, reason, logic, and truth and meet the male counterpart within me and within my reality on a balance equal level, where the male within this equation has to become humble to meet the female on an equal balance level, where he is able to interact and receive the creative expression of the female in her movements and flow.

So there is a meeting in the middle so to speak I have found within my own self as the masculine and feminine within me, the 'ego' of the mind/masculine within and the 'suppressed' expression of my own self worth and self-respect, and redefining and living my own self-expression within these two expressions, I have found I was able to come to a balanced medium within my living reality. Where now I am able to move from one to the other with ease and express or become stable in moments where I see fit to walk as such, so stepping up as the feminine expression within me as my passions, my expressions in living words, my flow as a river of life into the extended lands of the masculine structure and support networks to be creative and see and live with and as my creation in wonder and awe. And be a plus one as the building and leader of the future to come for all in what is best, standing more in the masculine expression as blueprint, planning, and building the 'new' world we would like to live in and have our children live in. The balance of the inner dance of the yin and yang, silenced in-breath and lived in what is best for all through one's self-responsible expression.

Thanks for reading and please feel free to leave any comment or questions if you see fit.