Day 265 – What Does Being A Loser Imply? Behind Words 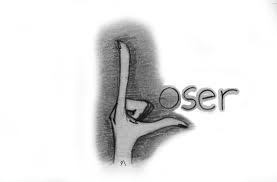 I listened to Anu’s interview today, and he was discussing on family rivalry and competition, and how within this play out with siblings we easily go into the point of ‘winning’ and ‘losing’ based on the inherent desirewithin us to be strong and thus be the ‘winner’, and so obviously not be ‘weak’ and be the ‘loser’.

So the first step he suggested within looking at this whole point of sibling rivalry, is too re-define the words winning and losing, starting with lose, lost, and/or loser, so I will start with the word – loser. I have a reaction to this word within a resistances and tension, like I don’t want to be associated with this word, it’s like a real negative, horrible experience within myself when I see the word loser. This based on seeing it as I am losing something of myself and will not be able to get that part of me back, such as losing my face for instance with others, my fake face as strength and being a loser means I am not strong and thus will not be able to be a fake face with others because they will see me for who I am, my name associate with me in the peer group, thus branded and a bad brand is not something one want to be associated with as that mean you are outcasted.

Why I want to be a fake face though one may say, and this is based on survival, it’s a learned behavior only done by humans to put on a fake face to impress others one’s abilities and capabilities even if it is false or unfounded, if you can fake it you can make it mentality. This based on humans living within judgment, separation, and abuse towards each other for greed and power. So being a loser is a huge point of fear as I see myself within being associated with this word at a lose, outcasted, abused, and thus not being able to survive with others and get what I desire.

Also, within being called a loser, it’s a point of being degraded and made to feel less then others, and so being called this brings a lot of fear, and so when I see that I may or could be perceived as a loser, I will go into suppression within my expression in fear of being seen as less then others or being called this name. I didn’t want to be seen as different and not part of the group because within being a loser and out casted, you are no one, you are not liked, and thus life because much more difficult and strained, you become the target of abuse because you are now weak. Interesting how I and we as humans, so easily will put another into this position as a loser, claiming it’s not a big deal, it’s just a little poking fun, it’s the way nature is. But it’s not, it’s most certainly is deliberate, a point of putting another in their place, and showing others who you are in relation to them/that other, that I am superior and you are a loser. Human nature does not have to be this way, in abuse and separation towards others; we can be as equals and live ni harmony with others through stopping this behavior. Though within being the one who is being out casted, I know that its not fun and games and jokes, when I am the one being called it’s a real big deal, it’s hurtful, and it cause a lot of stress and anxiety within me.

I will walk self forgiveness in the next blog and redefine this word.