Walking from Desires to Agreements - Day 357 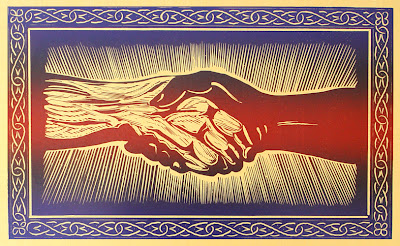 A point came up tonight where I had to really look at the starting point of something that I desired quite strongly, and within myself I saw when I was met with opposition to my desire by another in my world, I went into an immediate point of defense and protection. It’s the same as like putting up a shield of armor and doing battle with an opposing army, that is what the experience and feeling feels like within my body the moment I see I will not be able to fulfill my desires as I had planned and expected.

I forgive myself that I have accepted and allowed myself to come into a decision point within my life with another in a point of resistance and expectation.

I forgive myself that I have accepted and allowed myself to expect to be able to do what I want and planned for it to go my way without hearing the others point of view.

I forgive myself that I have accepted and allowed myself to use manipulation within myself towards others to get my desires met at any cost.

I forgive myself that I have accepted and allowed myself to not live principled within each breath, but have my self interest come first and do harm onto another.

I forgive myself that I have accepted and allowed myself to go into a point of resistance and defense when I found my desires being questioned and so potentially not being fulfilled.

I forgive myself that I have accepted and allowed the energy of the picture in my mind of me having my desires met with my will of manipulation before even speaking and hearing what the other had to say.

I forgive myself that I have accepted and allowed myself to desire to be right and so have the final say.

I forgive myself that I have accepted and allowed myself to give into the desires within my self interest way of living rather then letting it go and standing as an equal with others and hearing them and considering them equal to how I would want them to hear and consider me.

When and as I see I am going into manipulation to get what I want I stop and breath, and realize that this will only in the end cause self compromise cause I am fighting and manipulating against myself, and so will not come to agreements with others because it’s impossible if I don’t see them as me and so treat them as an equal as how I would want them to treat me.

When and as I see I go into the mind into a desire through a picture, scene, or imagination, I stop and breath, and realize that this is going into the mind dimensions and I am not taking the physical reality into consideration as I am not here within the conversation that is being addressed.

I commit myself to breath when I see this playout of imagination or pictures come up and stop participating.

I commit to stop the point of trying to prove my point or manipulate the situation or the others to get my way.

I commit to hear the other and self honestly consider the others words and perspective equal to myself and decide according to all the information gathered on how I will proceed.

I commit to come to agreements with all parties involved where there is an observed consideration by all and all are heard, and so all come to a decision that is agreed upon after deliberation that is best for all.

Through the tools I have been walking with desteni, they have supported me in stopping this point of going into the self centered actions of trying to move reality to favor me through manipulation and passive force, and learned the act of considering others as my equal. Within this point that was brought up tonight, I was able to after a few moments of seeing the desire increase and the potential for reaction towards the other start to accumulate, I stopped myself and looked at the whole playout of what I was doing within myself and what the other was saying and expressing within him, and found I was able to release these desires and actually hear what the other was communicating towards me about the reasons he objected. And so I was able to, say in a quantum moment, look at the consequences of what the different outflow potentials that were able to occur and so I then could see the direction that was best by opening myself to all the factors and deciding and directing myself in the moment based on the principles I am living, one and equal with all beings in my environment. So it’s cool that with a shift in perspective and priorities, opening myself up to more of what reality is showing me, and choosing the direction within myself I will take after consideration of the real time assessment in the moment, I am able to change myself in real time to stop my desires to be selfish and consider another as an equal part of my world and make a decision based on this equality and understanding.

We came to an agreement about the point I desired, and it was done, no emotions where used, we did look at the emotions though and address them, but it was within a point of self correction and not used in a point of manipulation. So I see I am starting to integrate more into a reality based communication with others in taking the desires and emotional experiences out of the daily occurrences that happen in my life, and make effective agreements based on all the information that is gathered with all the people and factors involved through a decision to do this in fact within myself in the moment it is happening. This making for a peaceful transition from self centered desires to a reality based decision, and working with the physical world around me and the people within it as equal contributors to the final agreement that has to be made. Making for less friction and conflict free living environment because all are considered and all had the chance for an equal say. It’s not an easy thing to give up desires at first, but once I have seen the benefit of this through seeing my world becoming more peaceful and efficient, I have to ask myself the question ‘what took me so long?’